Carolin Hirsch introduces Break the Silence: #AskForZarni, an initiative to raise awareness and prevent sexual harassment and assault in Yangon’s nightlife. Sexual harassment and assault are well-known, albeit unspoken, problems in the public spaces of Yangon and elsewhere in Myanmar. The initiative was launched in April 2018 by a group of local and foreign people living in Yangon, Myanmar. As a first step, the initiative targets nightlife venues to set up an infrastructure in which people who experience sexual harassment or assault as well as active bystanders can discreetly ask for assistance from bar employees and security staff who receive a specific training to identify and intervene in such situations.

„Can I speak to Zarni?“ – A simple phrase people may use to disguise their request for assistance when facing harassment in 7th joint, one of Yangon’s most popular nightlife venues. This was the initial thought behind the Break The Silence – #AskForZarni initiative. The bar and security staff of 7th joint were the first to be trained on sexual harassment and assault at the beginning of July. The training combined harassment education with bystander intervention training. It was held by Dr. Thet Su Htwe, founder of Strong Flowers, a sexual health education organization, as one part of Break The Silence – #AskForZarni’s goal to build up an infrastructure within Yangon’s nightlife that enables and encourages accountability to respond and prevent harassment and assault. Additionally to the training, bars and nightlife venues agree to adopt a written policy against harassment and assault, and they put up posters, which encourage bystanders and people who are being harassed to ask staff for help. Such a poster can now be found at 7th joint, which functioned as a pilot bar for the initiative Break the Silence: #AskForZarni. It shows typical scenes of harassment in nightlife to explain sexual harassment to guests and how to use the code “Ask for Zarni”. In this way, everyone at the bar is aware and bystanders are encouraged to seek assistance through the posters.

The initiative started in April 2018, when the secret Facebook group Yangonites against Sexual Harassment and Assault was created to gather people for advice and support after an incident of sexual harassment in nightlife ended in sexual assault. Out of this Facebook group twelve people came together to implement further action. They phrased an open letter to the owners of Yangon nightlife venues, opening with the following statement:

„We, local and non-local women and men living in Yangon and visiting your places on a regular basis, are addressing you to raise awareness of sexual assault which is becoming an increasing problem in Yangon nightlife. We write this letter to you in the hope that you listen to our requests. We seek your support and ask that you join us in our efforts to create a safe space for men and women who frequent nightlife establishments in Yangon. Our aim is for all people to enjoy going out in Yangon without fear of being harassed, harmed, and/or assaulted“ (Awareness raising of sexual assault in Yangon nightlife – Petition).

After collecting signatures for their cause, the group met with Mario Ebanks, the owner of 7th joint Bar & Grill. The group spoke to Mario about what had happened and collectively, they developed strategies of how to raise awareness and how to make a difference. Here, the idea to combine training with a visual campaign was born, and the seed for the initiative was planted.

In the following period, the group continued to work on poster content, reached out to organizations like Myanmar Women’s Self Defense Center and Strong Flowers and Gender Equality Network, and included photographers and graphic designers into the process. A lot of people gathered around the core group of the initiative to not only give their support and feedback, but also to share their own experiences of sexual harassment. Hearing peoples’ stories was vital to reveal the magnitude of the problem and made one thing crystal clear: It is high-time for an initiative like this!

Through the first few meetings, in which concerned individuals came together to share their experiences, the initiative became more clearly defined and got its name: Break the Silence: #AskForZarni

Ask For Zarni is literally breaking the silence. It is a code to ask for help when one is facing a critical situation. The situations include, but are not limited to, forcing someone into unwanted conversation, into close physical proximity, inappropriate physical contact by grabbing, groping, and restraining, as well as making unwanted sexual comments and advances. Asking for Zarni instead of asking for help is a less direct and easier way to speak up, especially in Myanmar where many people are very non-confrontational and indirect in their communication style. When people may feel shy, insecure, vulnerable, or experience a sense of shame, they may feel more comfortable asking to speak to Zarni than directly saying they are being harassed. People have asked, “Why Zarni?“ or „Who is Zarni?” Zarni is a male and female name in Burmese, and Zarni means brave in Burmese language. Thus, all of us are Zarni when we speak up and break the silence. All of us are brave.

According to research carried out by Myanmar Women’s Self Defense Center women in Yangon regularly face sexual harassment on buses and taxis. Public spaces are usually male dominated in Myanmar. In these areas, women’s bodies are not fully respected, women aren’t accepted as equals here, since it is mainly the domestic domain which is deemed a suitable place for women. Sexual harassment and assault are problems that can occur in all areas of society, during the day and the night, in private like in public space. And it is also a reality becomes apparent in nightlife. Women reported that they are constantly told to stay at home after dark, wear ‘modest’ clothing, and refrain from drinking. Otherwise, so goes the narrative, they themselves provoke harassment and assault. It’s not the offenders who are blamed but the victims. Furthermore, offenders seldom see their behavior as harassment and assault, as many have never been confronted or had to face consequences for their behavior.

The negative consequences of this social reality are that many women are made to feel unsafe when going out, victims of sexual harassment and assault do notfeel confident enough to speak up, bystanders believe it is a private matter that does not warrant their involvement, and offenders continue their behavior. If condoned and ignored, harassment can lead to assault. 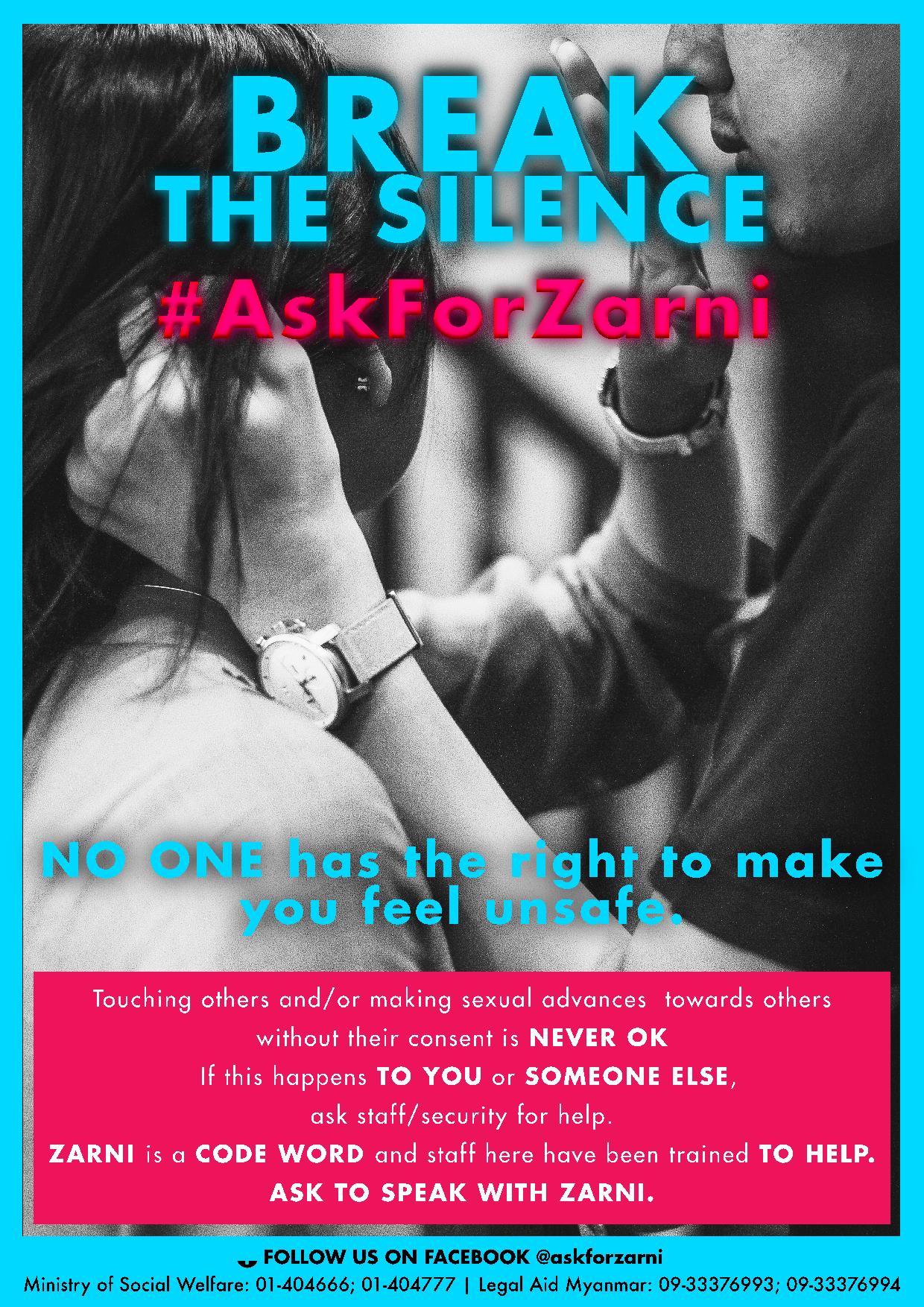 The posters which the initiative designed are supposed to depict ‚typical harassment scenes,‘ ones that are common but often overlooked and not identified as harassment. The core group of the initiative used the Facebook group Yangonites against Sexual Harassment and Assault, asking people to volunteer for a photoshoot at 7th joint. The photo shoot started off with a brainstorming session on typical harassment situations in nightlife with the volunteer models. During the discussion, the models nodded in agreement, expressing that such situations are not unfamiliar to them. Then they re-enacted the discussed scenes in front of the camera.

The initiative’s core group also reached out to Dr. Thet Su Htwe’s, from Strong Flowers, for her involvement and support. The organization is dedicated to “increase understanding of healthy sexuality and to promote gender equality through building knowledge, self-awareness, and through providing a safe environment for youth and others to discuss and explore topics related to sexuality.” Together with Dr. Thet Su Htwe, the group developed a strategy which combines harassment education with bystander intervention training. The training addresses social norms around gender expectations, the question of what constitutes harassment and assault, Myanmar laws on the matter, and intervention strategies.

Once the posters, training, and the campaign name were finalized, the initiative went online. An open facebook page for Break the Silence: #AskForZarni was created in June. To celebrate this big step of going online and bringing Break the Silence: #AskForZarni to life the local event organizer D.I.T. – Do It Together organized a support gig at Pirate Bar in Yangon. On this gig mostly female local musicians, like T-Zin, Maze of Mara, Nway Nway, Voodoo, Zoey, Royal Radio and Brain Trust played a free concert to show their support for the efforts and aims of the initiative and to stand in solidarity against harassment and assault.

With the first bar and security staff trained and the first posters marking the walls of Yangon’s nightlife venues, the initiative is one step closer to achieving their aims- educating people on what sexual harassment and assault are, raising awareness for this matter and training bystanders on how to intervene when they witness it. Most importantly: To let victims of harassment and assault know that they are not alone and to encourage everyone to speak up.

Recently, the members of the initiative held an open meeting at the Social House in Yaw Min Gyi street in Yangon, open to all interested persons to learn about the initiative, to share their experiences, and to talk about harassment and assault in Myanmar and what can be done to stop it. Similar events are planned to serve as a forum for people to show their interest, join the group, share their experiences, and show their solidarity for the cause.

The training and the campaign have been developed further since its launch at 7th joint. The training is now twice as long, ten hours instead of five, includes a mandatory review session after two weeks, and requires bar owners to adopt a written policy for their establishment against harassment and assault. These changes were be applied already in newly held trainings, like the one on September 17th-19th at Penthouse. Other nightlife venues have expressed their interest in also taking the training, adopting a policy, and supporting the campaign and posters – For a safe Yangon nightlife, for everyone.

Carolin Hirsch is a PhD candidate in Social and Political Anthropology at the University of Konstanz. For her PhD project „Activist becoming in contemporary Myanmar“ she is conducting long-term fieldwork in Yangon. During her first fieldwork stay she co-founded the initiative „Break The Silence: #AskForZarni“.

Carolin Hirsch is enrolled as a PhD candidate in Social and Political Anthropology at the University of Konstanz in Germany. She carried out long-term ethnographic fieldwork in urban Yangon in Myanmar, focusing on a group of Punk activists who are centred around the Burmese Punk band Rebel Riot.