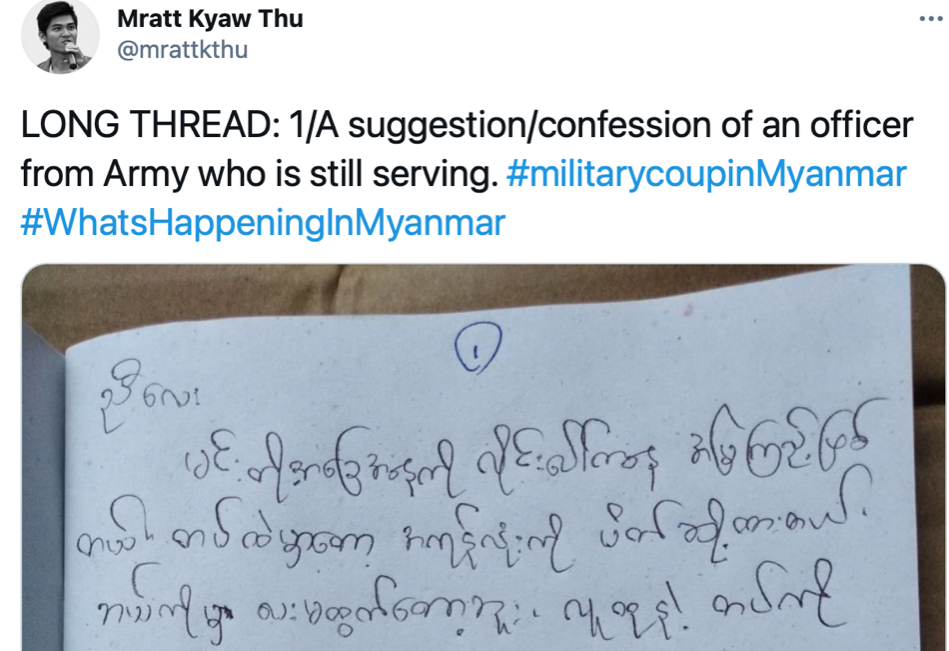 Samia Akhter-Khan takes a look at a letter from within the military – and analyzes how the current events in Myanmar correspond with the advice it has given to people.

The world hears Biden announce sanctions against the Myanmar military, but do we pay attention to what is happening inside the country? The civil disobedience movement (CDM) is growing bigger, and I could write a blog entitled “fake news of the day.” But more interesting, perhaps, is a letter with secret advice written by a military officer to “the people.”

A week ago, shortly after the military coup d’état on February 1st, my friend and prize-winning journalist from Myanmar, Mratt Kyaw Thu, released a letter from a serving military officer on his Twitter account (@mrattkthu). In his letter, the officer discloses insights about the strategies and weaknesses of the military facing the CDM.

Here is what it says, how people have followed his advice, and why there is hope.

“Nyi lay”––younger brother––“I’m sending this hand-written letter to you through much difficulties,” the officer writes. He reports that the military’s actions are highly strategic, no information is supposed to leak. Communication between members of the military and the “outside world” is being banned. According to the officer, soldiers are being brainwashed; they are trained to see red as the color of the enemy. In Myanmar, red represents democratic resistance, such as during the uprising in 1988 when Nobel peace laureate Aung San Suu Kyi spoke to the public for the first time. It is the color of the National League of Democracy (NLD), Suu Kyi’s party. Yet, there are people in the military who want to stand with “red,” the officer assures, but there is no way out for them without risking up to 20 years in prison.

All this sounds intimidating, and it is, but every powerful entity has its weakness.

The military is scared of the CDM. According to the officer’s letter, the Tatmadaw feared that people from outside the NLD would join the movement. This could include people in the education, health, and business sectors (the concern is not surprising, given that the military makes billion-dollar profits by owning Myanmar Economic Holdings Limited). If employees from its own companies stood united on the resisting side, this would create great difficulties for installing another decade-long military dictatorship.“That’s why you need to show that CDM is a movement led by ‚real‘ people.” People thus must continue with the CDM, ideally for at least the first 2-4 weeks after the coup, for it to be effective. The longer the movement takes to establish, the better the military leaders could manage the situation. And, as the officer concludes: “If the military and police join the CDM, it’s game over for them [the military leaders].” But it won’t be an easy undertaking.

Notably, this letter was published on February 5th, before the nationwide protests began, which called for the military to hand over power to the newly elected government. Much has happened since; events are unfolding rapidly. But have Myanmar’s citizens followed the officer’s advice?

As one of my friends described, this is what a regular day in Myanmar currently looks like for most people: “Protests and boycott in the morning, then to the office, and at 8pm hitting pots and pans.”

It seems like people have followed the leaked advice. Protesters fear that, if no action is taken now, things will never change. Hundreds of thousands of courageous people are on the streets trolling the military leader Min Aung Hlaing, walking until their feet ache, and shouting determined cries for justice. People are not only demanding the military to step down and release all political prisoners, including “Mother Suu.” They are also protesting for the abolishment of the 2008 constitution, which allows the military to reserve 25% of the parliamentary seats without being elected as well as ensure control over several industries.

When I write “people,” I am referring to students, older people, religious leaders, teachers, members of NGOs and CSOs, doctors, nurses, governmental staff, the LGBTQ community, and even police. Last week, over one hundred employees from the military-led news channel Myanmar Radio and Television (MRTV) have joined the CDM. Across different sectors, religions, and ethnic groups––as hoped for by the military officer––people are standing up against their shared enemy: the military.

Finally, the biggest fear of the military should be the changes that time has brought up to the year 2021. Historical and cultural contexts have changed. People in the country are aware of how the military is intentionally spreading fake news on social media and using authoritarian tactics to provoke violence to perpetuate a very different picture of the peaceful protests.

It’s a dangerous challenge, but the diverse country is risking everything, and people are uniting for democracy and freedom of speech. “Diversity is beauty, unity is strength,” as my friends would say. As for now––and let’s hope we are right––it seems like the military messed with the wrong generation.